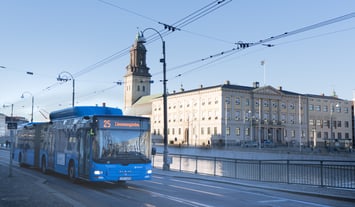 PRESS RELEASE – PARIS - 5 May 2021 - On 16 April 2021, Keolis was awarded a ten-year contract, worth €150 million, by Västraffik, Gothenburg's public transport authority (PTA), to operate and maintain articulated fully electric buses. The contract is scheduled to come into force in June 2022.

It includes replacing the city’s biodiesel and biogas-powered buses with fully electric ones and adapting three depots so they can maintain and charge the electric vehicles. This is part of Västraffik’s goal of converting its city bus fleet into electric buses by 2030.

The award reflects Västraffik’s confidence in Keolis as a partner in converting its buses into electric ones across the region in order to provide reliable, clean and comfortable mobility solutions to Gothenburg’s residents and visitors.

Bernard Tabary, CEO International of Keolis Group said: “We are honoured that Västraffik, with whom we have been partners since 2010, has entrusted us with operating and maintaining the 100% e-bus network in Gothenburg. We look forward to supporting our public transport authority partner in rolling out electric buses and making the necessary changes to the infrastructure that will improve the daily life of Gothenburg’s residents. Keolis’ expertise in electromobility will doubtless be a key factor in the success of this project.”

5 May 2021 – On 16 April, Keolis’ subsidiary in Sweden, Keolis Sverige, was awarded a new contract by Västraffik, Gothenburg’s PTA, to operate and maintain an articulated fully electric bus fleet(1) in the north-eastern part of the city. The ten-year contract, worth €150 million, will come into force in June 2022.

Gothenburg and its metropolitan area are home to 1.5 million residents. Located in the south- western part of the country, it is Sweden’s second largest city.

This contract is part of Västraffik’s strategic goal of converting its city bus fleet into electric buses by 2030.

17 million passengers per year carried on sustainable and quiet buses

The network features two lines and will carry 17 million passengers per year. The articulated electric buses are expected to cover 2.9 million kilometres annually.

The e-buses can be charged at the three depots across the network(2), all of which will be adapted

and equipped with overnight charging facilities. To deploy e-buses and adapt the infrastructure, Keolis can count on the best practices developed and lessons learnt in deploying alternative energy fleets in France, Norway, the Netherlands and the US.

With these 100% electric buses, Keolis is committed to enhancing the passenger experience, providing a quieter and more sustainable transport solution, while preserving the environment.

Keolis reinforces its presence in Sweden

Keolis Sverige has been present in Sweden since 2003 and operates 1,600 fossil-free buses in four Swedish regions, covering 100 million kilometres every year.

On behalf of Västraffik, Keolis operates three other bus networks, all running on alternative energies and, by the end of the year, will operate a fourth network linking Gothenburg to Borås. Since January 2021, Keolis has also been testing a Navya-built autonomous electric shuttle service in Gothenburg’s Lindholmen Industrial and Science park.

In 2020, Keolis teamed up with partners(3) in Stockholm to remotely control and supervise autonomous electric vehicles using 5G technology.

Keolis has over 4,500 employees in Sweden.

Committed to supporting PTAs to meet the challenge of energy transition

Committed to embracing more environmentally friendly forms of mobility, Keolis supports PTAs in developing and deploying clean bus fleets that run on electricity, natural gas, biogas, hydrogen and other alternative fuels that are better for the environment and for people. The regions in which it does this include:

The Group operates a total of about 4,000 alternative energy vehicles worldwide, which is about 20% of its bus fleet.

Key figures of the contract

Keolis is a pioneer in developing public transport systems and works alongside public authorities who want to enhance shared mobility systems to grow the appeal and vitality of their regions. A world leader in operating automated metro and tramway systems, Keolis and its partners and subsidiaries Kisio, EFFIA, Keolis Santé and Cykleo support the core business with innovations offering new and bespoke shared mobility solutions for modes including trains, buses and coaches, trolley buses, shared car solutions, river and sea shuttle services, bike share services, car sharing, fully electric driverless shuttles and urban cable cars. In France, Keolis is the second largest provider of parking management solutions through its subsidiary EFFIA, and the country's leader in medical transport since the creation of Keolis Santé in July 2017. The Group is 70%-owned by SNCF and 30%-owned by the Caisse de Dépôt et Placement du Québec (Quebec Deposit and Investment Fund) and employs 68,500 people in 16 countries. In 2020, it posted revenue of €6.1 billion. In 2019, 3.4 billion passengers used one of Keolis’ shared mobility services. www.keolis.com