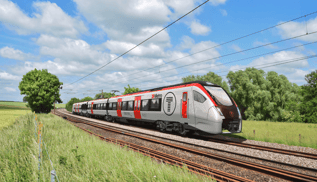 “Thanks to this iconic win, Keolis changes in scale in the UK and confirms its position as a world-class mobility operator, particularly in the railway sector. This new victory demonstrates our ability to accompany transport authorities through mobility improvements in their region. KeolisAmey will thus play a key role in enhancing the attractiveness of the country while offering an optimised daily mobility service to all the people of Wales,” says Jean-Pierre Farandou, CEO of Keolis.

On 4 June 2018, the Welsh Government appointed KeolisAmey, a joint venture created by Keolis and Amey, to manage the operation of its national railway network.

1,623 km long, this railway network comprises 247 stations and over 2,000 employees. Over the life of the contract, KeolisAmey is envisaging the creation of 600 new jobs and 450 new apprenticeships (30 every year).

For the next 15 years, KeolisAmey and Transport for Wales will share the ambition to propose a renewed, modernised mobility offer to the 32 million annual passengers travelling on the network, in particular thanks to the renovation of railway infrastructure and rolling stock.

– renovate the 247 existing stations and create 4 new ones,

– replace a large part of the existing fleet with 148 new trains. By 2023, the average age of the fleet will therefore fall from 25 years to 7 and 95% of the journeys will be carried out on new trains,

– create extra services on Sundays (+61%), thereby switching to a continual 7-day service for the first time,

– invest in new technologies to optimise the overall performance of the network,

This is therefore a major win for the Group, as it allows it to become one of the leading players of rail in the UK while also reinforcing its expertise in rail.

Keolis reinforces its presence in the UK

Based in the UK since 1996, Keolis, which already employs 13,300 people in the country, has become a benchmark operator with the award of several emblematic contracts, notably in London, Manchester and Nottingham. Keolis has partnered with various British companies and created several joint ventures to operate five other networks.

KeolisAmey, the joint venture created by Keolis and the British company Amey in 2014, already operates:

With its British partner the Go-Ahead Group, through the Govia joint venture, Keolis operates:

Keolis consolidates its expertise in rail on the international market

As the world leader in trams and automated metros, Keolis continues to reinforce its expertise across all daily mobility modes. The win of the Wales & Borders railway network consolidates the Group’s expertise in operating rail networks.

Leading the way in public transport, Keolis partners with public decision makers to make shared mobility an asset for cities and their communities. Internationally recognised as the leading operator of trams and automated metros, Keolis adopts an innovative approach with all its partners and subsidiaries (Kisio, LeCab, EFFIA, Keolis Santé and Cykleo) to develop new forms of shared and customised mobility, and reinforce its core business across a range of transport modes including trains, buses, coaches, trolleybuses, shared private hire vehicles, river shuttles, ferries, cycles, car sharing services, electric autonomous vehicles and urban cable cars. In France, Keolis is now the leader in medical transport services through the creation of Keolis Santé in July 2017 and positioned as the number two car park operator, through its subsidiary EFFIA.

The company is 70% owned by SNCF and 30% by the Caisse de Dépôt et Placement du Québec (CDPQ). Keolis employs 63,000 people in 16 countries and recorded revenues of 5.4 billion euros in 2017. Each year, over 3 billion passengers worldwide use one of the shared mobility services offered by Keolis.

* Keolis is historically present in France and has developed in Germany, in Australia, Belgium, Canada, China, Denmark, Qatar, the United States, India, Luxembourg, Norway, the Netherlands, Portugal, the United Kingdom and Sweden.