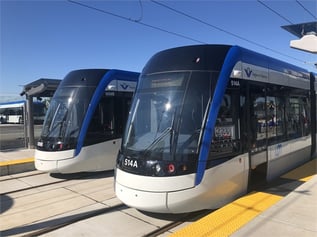 Waterloo Region, June 21, 2019 – The first of the two phases of the ION Light Rail Transit (LRT) – Region of Waterloo’s new rapid transit system in Ontario, Canada – was launched today at Kitchener’s Fairway station. The modern system will serve the residents and visitors of Kitchener, Waterloo and Cambridge, as well as surrounding rural municipalities. As part of the GrandLinq Consortium , Keolis Grand River – Keolis’ local subsidiary – is responsible for the 16 km light rail line operations for the next 10 years and maintenance for the next 30 years. The contract, which was awarded in May 2014, is under a Public-Private Partnership (PPP). This is Keolis’ first light rail operation in North America.

The ION LRT is transformative for the Region of Waterloo, which is the fourth largest community in Ontario with an existing population of over half a million. The network is funded by all three levels of government and fully integrated within the Region of Waterloo’s existing public transport service, Grand River Transit (GRT). The transport options, for which just one fare applies, will be flexible and inclusive as the population grows.

Keolis – which currently operates 25 tram networks in the world – will use its expertise to ensure the smooth operation and maintenance of the ION LRT.

“We are delighted to start operating the light rail for Region of Waterloo,” says Clément Michel, President and CEO of Keolis in North America. “We began testing and commissioning the trams and control center in July 2017. Now, with responsibility for operating and maintaining the ION LRT for Region of Waterloo, we’re looking forward to enhancing the quality of life in the region for many years to come. Supporting cities and regions in developing sustainable, accessible and comfortable mobility solutions is in our DNA. We’re proud to accompany Region of Waterloo’s authorities and residents in shaping the region’s public transport with this new network, which is our first light rail operation in North America.”

This light rail is core to the Region’s ambitious master plan for sustainable mobility to create a one urban area, from the 3 cities, and to increase the attractiveness of the Technological Triangle of Canada.

The trams will run on a dedicated rapid route along tracks isolated from regular traffic, except at intersections and road crossings. The project is divided into two phases. Phase 2 studies are underway.

As part of the launch celebrations, all Grand River Transit services — both trams and buses — will be free to ride for 11 days from the kick-off on June 21 to July 1. Monthly pass holders will get a $10 discount.

Keolis is responsible for 25 tram networks (985,5 km of track) around the world:

Keolis has been present in North America since 2002. It counts over 5,000 employees and carries more than 100 million passengers per year in the United States (Massachusetts, Virginia, Florida, Nevada, North Carolina and California) and in Canada (Ontario and Quebec). Keolis in North America operates a variety of shared mobility modes including local and express fixed-route buses, interurban and urban transit, light rail, electric automated shuttles, taxis, traditional and electric school buses, paratransit, airport and charter transportation as well as on-demand transport.

Keolis, a pioneer in the development of public transport services, works with public decision makers aiming to enhance the attractiveness and vitality of their territories using shared mobility. Global leader in the operation of automated metro and tram networks, Keolis is committed to a policy of strong, open innovation with all its partners and subsidiaries: Kisio, EFFIA, Keolis Santé, Cykleo. This commitment strengthens the core business and enables new, innovative and “customised” shared mobility offers for trains, buses and coaches, trolley buses, collective private driver services, river and sea shuttles, self-service bicycles, car-sharing, 100% electric automated shuttles, urban cable cars and other modes. In France, Keolis is no. 2 in the parking market with its subsidiary EFFIA and no. 1 in medical transport, since Keolis Santé was created in July 2017.

70% owned by SNCF and 30% by CDPQ (Caisse de Dépôt et Placement du Québec), the Group employs 65,000 people in 16 countries, and generated turnover of €5.9 billion in 2018. In the same year, 3.3 billion passengers used one of the shared mobility services proposed by Keolis.